New paper on bilingualism and creativity

Together with current and former members from the Austerweil Computational Cognitive Science lab, LCNL researcher Elise Hopman published a new paper today in PLoS ONE looking at the relationship between bilingualism and creativity .

Are bilinguals more creative than monolinguals? Some prior research suggests bilinguals are more creative because the knowledge representations for their second language are similarly structured to those of highly creative people. However, there is contrasting research showing that the knowledge representations of bilinguals’ second language are actually structured like those of less creative people. Finally, there is growing skepticism about there being differences between bilinguals and monolinguals on non-language tasks (e.g., the bilingual advantage for executive control). We tested whether bilinguals tested in their second language are more or less creative than both monolinguals and bilinguals tested in their first language. Participants also took a repeated semantic fluency test that we used to estimate individual semantic networks for each participant. We analyzed our results with Bayesian statistics and found support for the null hypothesis that bilingualism offers no advantage for creativity. Further, using best practices for estimating semantic networks, we found support for the hypothesis that there is no association between an individual’s semantic network and their creativity. This is in contrast with published research, and suggests that some of those findings may have been the result of idiosyncrasies, outdated methods for estimating semantic networks, or statistical noise. Our results call into question reported relations between bilingualism and creativity, as well as semantic network structure as an explanatory mechanism for individual differences in creativity. 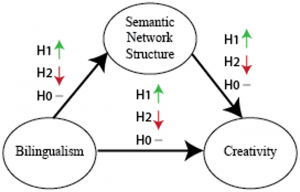